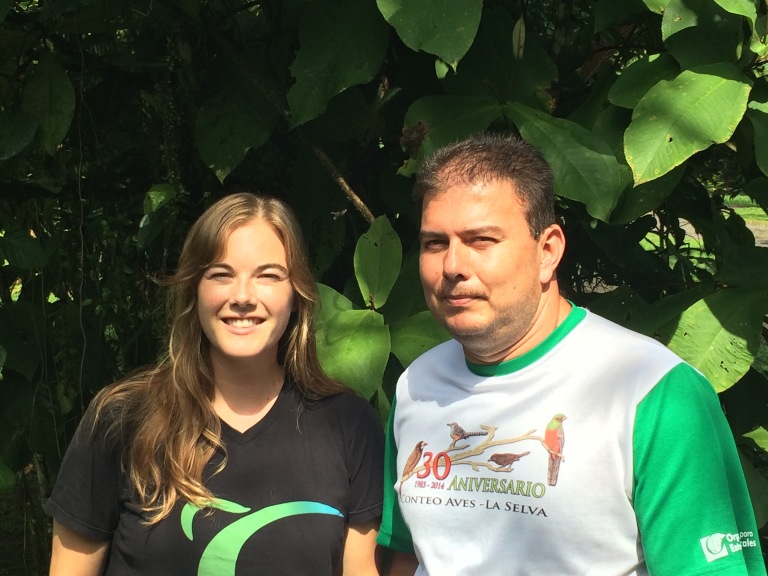 The body was still warm under his hand. A boy then, Rodolfo Alvarado had never even seen a jaguar, let alone touched one, so when he heard about the carcass he jumped on his bike and raced over. It was the mid-1980s, and local farmers had killed the huge cat with permission of the Costa Rican Ministry of Environment because it had developed a taste for their cattle.

Now 40, Rodolfo seems to have given up hope of ever seeing a live jaguar, even though the Costa Rican government has since stopped giving permission to kill them. Rodolfo has much bigger concerns than the fate of just one species. He is the Natural History Coordinator at La Selva Biological Research Station. Run by the Organization for Tropical Studies (OTS), a non-profit promoting research and education, La Selva serves as a resource for scientists and students who come to Costa Rica from around the world to study tropical rainforest biology. The desire to learn about the rainforest is not limited to academic types–over 8,000 tourists come to La Selva annually. Rodolfo manages the guides who lead these visitors on interpretive natural history tours. For him, each tour is an opportunity to connect the public to this diverse ecosystem, and to raise awareness about the threats to tropical forests. Awareness fosters support for conservation, and hope for the future of La Selva.

Costa Rica has an excellent reputation for conservation and ecotourism, but that doesn’t mean all Costa Ricans are born conservationists. Rodolfo’s passion is somewhat rare, and comes from his unique family history. In a way, working at La Selva is the family business–Rodolfo followed his father and two older brothers into work there. “Since I was maybe 10 years old, my older brother was … following birds around the house with mist nets, measuring them, you know, while other kids were killing them,” Rodolfo says about Joel, who is also a La Selva guide.

We are chatting in his office on a rainy morning while scientists and tourists are intrepidly venturing out into the forest. Rodolfo is quiet, and I worry he might not appreciate an enthusiastic gringa barging into his office for a long chat. But within minutes his sarcastic sense of humor surfaces and I relax. We dive deeper into his family history. His father, Isaias, started working at La Selva in 1980 in the maintenance department, but he quickly rose through the ranks to become head of operational staff. He would often help researchers figure out how to turn their scientific visions into reality, and he became a bit of a scientist himself. Though Isaias is retired now, just a couple years ago he co-authored a paper describing a previously unknown behavior he observed in the local river otters.

Isaias was a skilled hunter before he signed the OTS contract’s no hunting clause, but he quickly switched to the preservationist camp. Before long he was in charge of the “ecological police,” a local volunteer squad of former hunters who used their knowledge of hunter behavior to help the nearby Braulio Carrillo National Park rangers catch poachers. The ecological police also taught the community why the animals should not be hunted, because they knew that education would have a stronger impact than law enforcement. At home, while his siblings cleared their land for pasture, Isaias chose to leave his 5 hectares standing.

These actions did not go unnoticed by Isaias’ children. One by one, Jaime, Joel, and Rodolfo began working as La Selva guides. There is a standardized system for guide training in Costa Rica, but La Selva’s unique position as a research station makes their guides among the best in the country. This is due in no small part to the fact that the guides interact with scientists on a daily basis. For 4 years Rodolfo served as a field assistant to an ornithologist, and he says that it made him a better guide. Describing field work, he says, “You learn things that you are not meant to learn in a book.” For example, he became skilled at finding bird nests even when the bird is trying to trick him into going the wrong direction. This helps him give visitors a closer look at bird life in the forest.

Rodolfo takes his responsibility as an environmental educator much further than finding animals and sharing facts about their natural history. He gets real with the tourists, telling them we only have 200 years left with the rainforest as we know it. He uses amphibians as an example: chytrid fungus is devastating species around the globe, and climate change has forced many populations to move to higher elevations.

As sad as it is that amphibians may be doomed, this alone is not what Rodolfo means when he says we only have 200 years left. “We’re talking about very sensitive organisms. But when climate change gets to hurt the strongest structures, which means the trees, is when there’s really a big impact happening.” Rodolfo describes to visitors a long-term study at La Selva that shows a correlation between high temperatures and low plant growth. If plants grow more slowly, they store less carbon. That leaves more CO2 in the atmosphere, which can speed up global warming, and exacerbate the cycle.

Scientists are often depressed by such serious threats to the environment. But when I suggest this to Rodolfo he says, “I don’t see it that way.” He believes that if we all change our behavior, there is hope–and that doing whatever we can to help is better than panicking. For him, that means sharing information about climate change and other threats to the habitat, such as deforestation, with everyone who comes on his tours. He hopes that it may influence they way they live their lives.

“It’s little by little,” Rodolfo says. He relates his optimism to a popular parable, and begins to act it out with his hands on his desk. “It’s like, when there’s a whole forest being burned, and there’s the fire. All the animals are running this way, and there was this little hummingbird coming towards the fire, and there was the jaguar. So they find each other.” Rodolfo’s hands meet in the middle of his desk, one flying above the other. The jaguar warns the hummingbird,

‘But then what are you doing?’

‘How are you going to help?’

‘I have water in my beak, I’m gonna throw it into the fire!’”

Rodolfo laughs as I delight in this parable, then sits back in his chair. “So, I do my part, you know?”

At first this seems like an even more depressing outlook–surely that little hummingbird can’t make a real difference alone! But imagine the entire community of animals throwing water on the fire. Rodolfo quickly adds, “It’s if everyone could do it, you know? I do what I can.” If every tourist leaves La Selva with this outlook, then perhaps there is hope for rainforests worldwide.